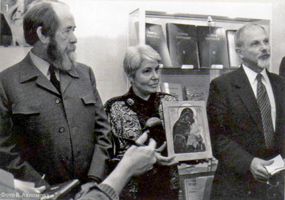 The Moscow state-financed cultural institution Alexander Solzhenitsyn House of Russia Abroad is a unique center that consists of a museum, archive, library, science and research center, information and publishing center, cultural and education center, working all together to bring together and research the cultural legacy of the Russian expatriate community, establishing and strengthening bonds with our compatriots living outside Russia.

The collection of the House includes more than 8,000 items, while the archive contains more than 25,000 exhibits. The library fund – an inseparable part of the House – has great historical and cultural value, with its more than 130,000 objects, 80% of which were published during emigration. Every year, the library acquires 3 to 4 thousand books and magazines. The funds of the House grow and form thanks to the numerous gifts from Russian people scattered across the world, thanks to their selflessness, generosity, and responsible attitude to their history.

The total area of all buildings of the House – the main one built in 2005 and the new one opened in 2018 – is over 13,000 sq. m. There are two large halls – a 200-seat conference hall and a 190-seat cinema and concert hall. The total storage area amounts to 1700 sq. m.; the restoration workshops occupy 93 sq. m. At the moment we are forming the exposition for the Museum of the Russian Expat Community, which will occupy over 800 sq. m. and will open in December 2018.

One branch of the House – the Memorial Apartment-Museum of Solzhenitsyn – is situated at its original address in Moscow: 12 Tverskaya St., building 8. The writer lived here with his family before he was exiled from the USSR.

The director of the House V.A. Moskvin was granted the Award of the Government of the Russian Federation in 2009, for the creation of the House of the Russian Expat Community. It acknowledged the extreme significance and merit of the House in the cultural and social life of the country. It was not by chance that in his letter dated August 2, 2009, to N.D. Solzhenitsyna, the Russian President Dmitry Medvedev wrote: "...For us, it became a unique platform where prominent scientists and artists, representatives of the Russian and global intellectual community can communicate. I am sure this will carry on into the future."

Welcome speeches from the opening ceremony of the Russian Expat Community Library and Fund in December, 1995: